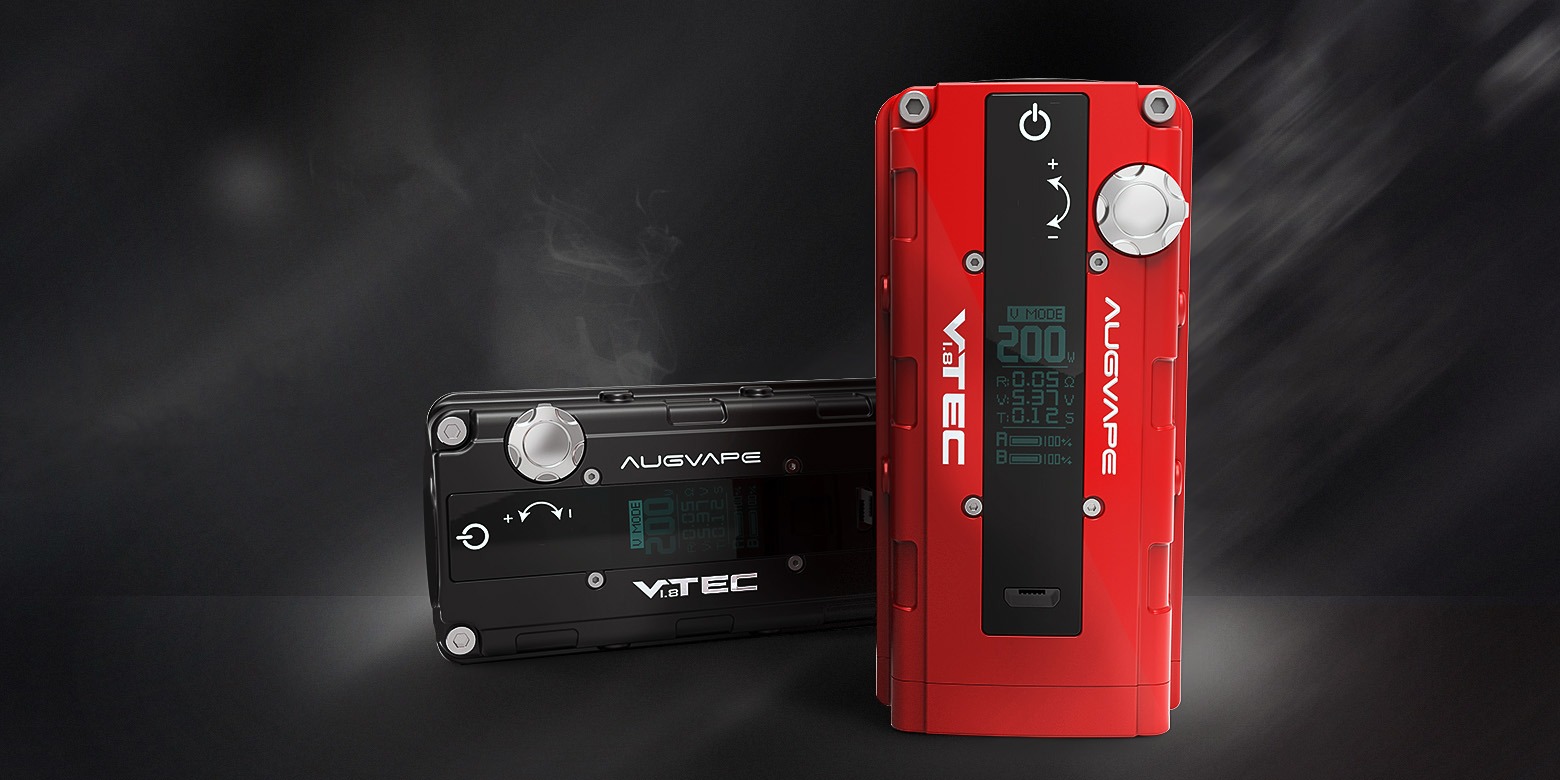 On August 14, Augvape introduced the VTEC v1.8 Box Mod , a direct descendant of the notorious V200, on their Facebook page . The new box mod has not undergone significant external changes, however, has acquired several modifications. They did not change the original style and depicted the zinc casing in the form of a smaller Honda Civic engine. The range of colors varied with a blue variation, apparently, it replaced the white one. A narrow control panel with an integrated ignition button, a monochrome display and a USB port stretched along the facade. The rotating arm was provided with a hermetic coating. The back side was decorated with a leather insert. Bottom fixed reinforced hinged cover. 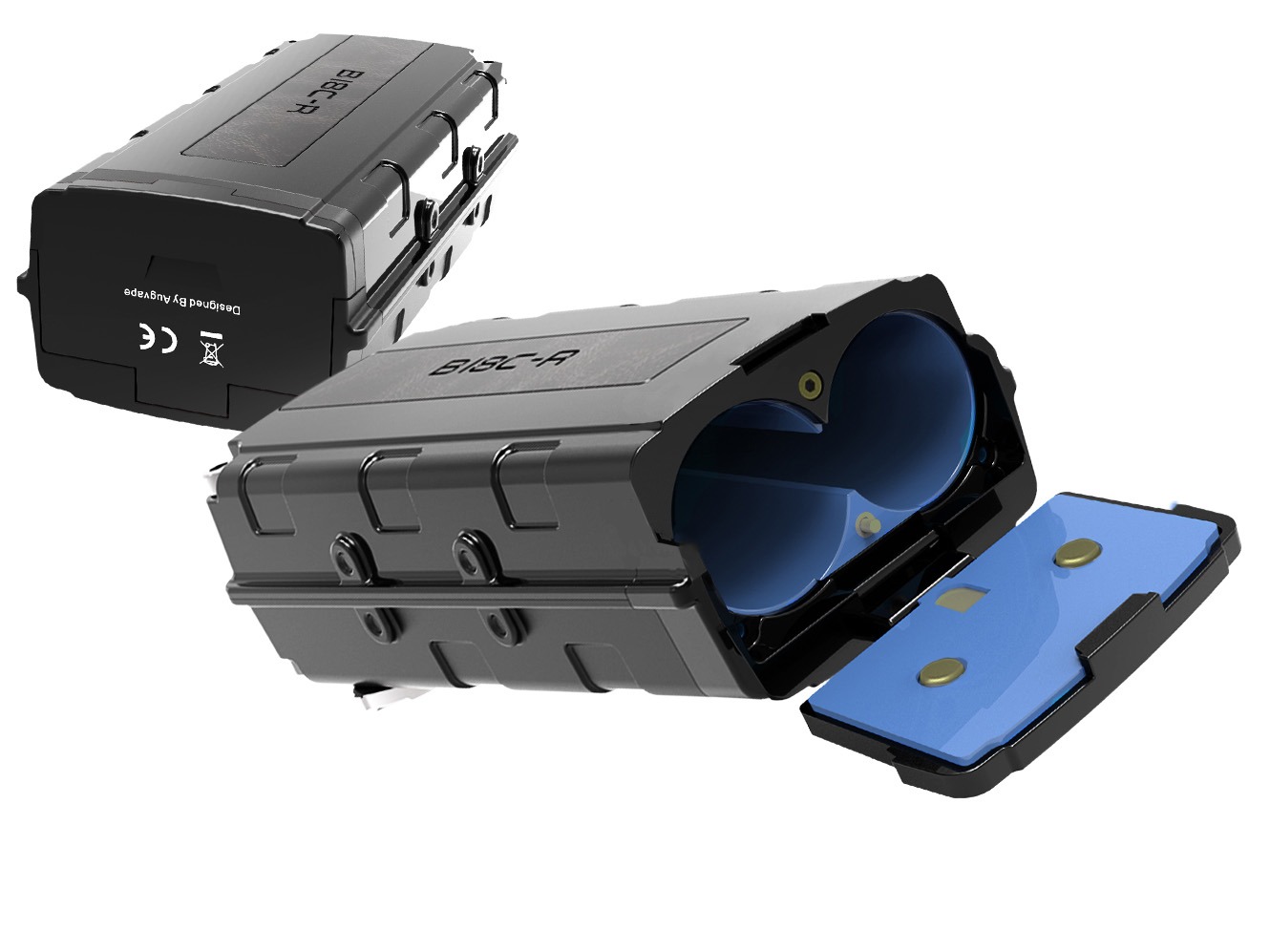 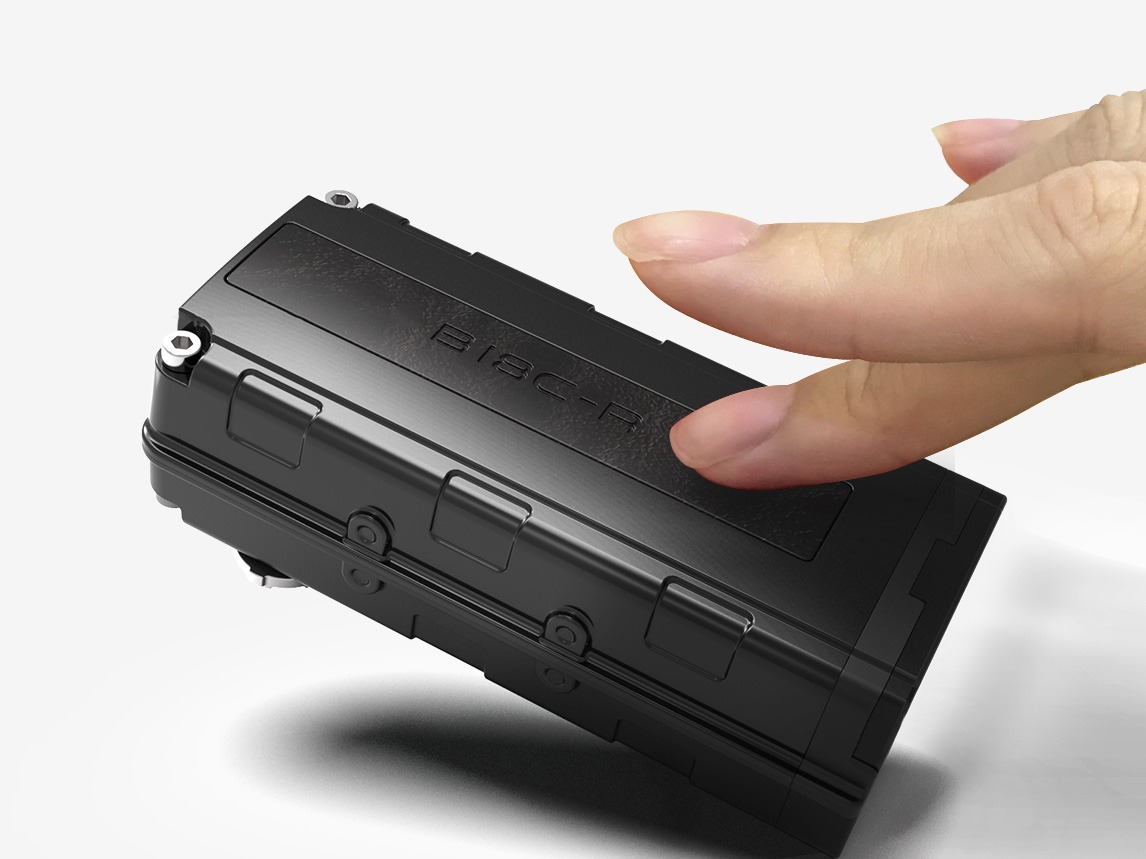 The output power can be adjusted over a wide range from 5 to 200 watts. In addition, a varivolt, bypass and a proprietary mode – V-mode are available, which positively affects the speed and performance of the device. Work is provided by a pair of 18650 format batteries, charging should be carried out through a USB port with a current of 1.2A. Supported resistance can vary from 0.05 to 3.0 ohms. 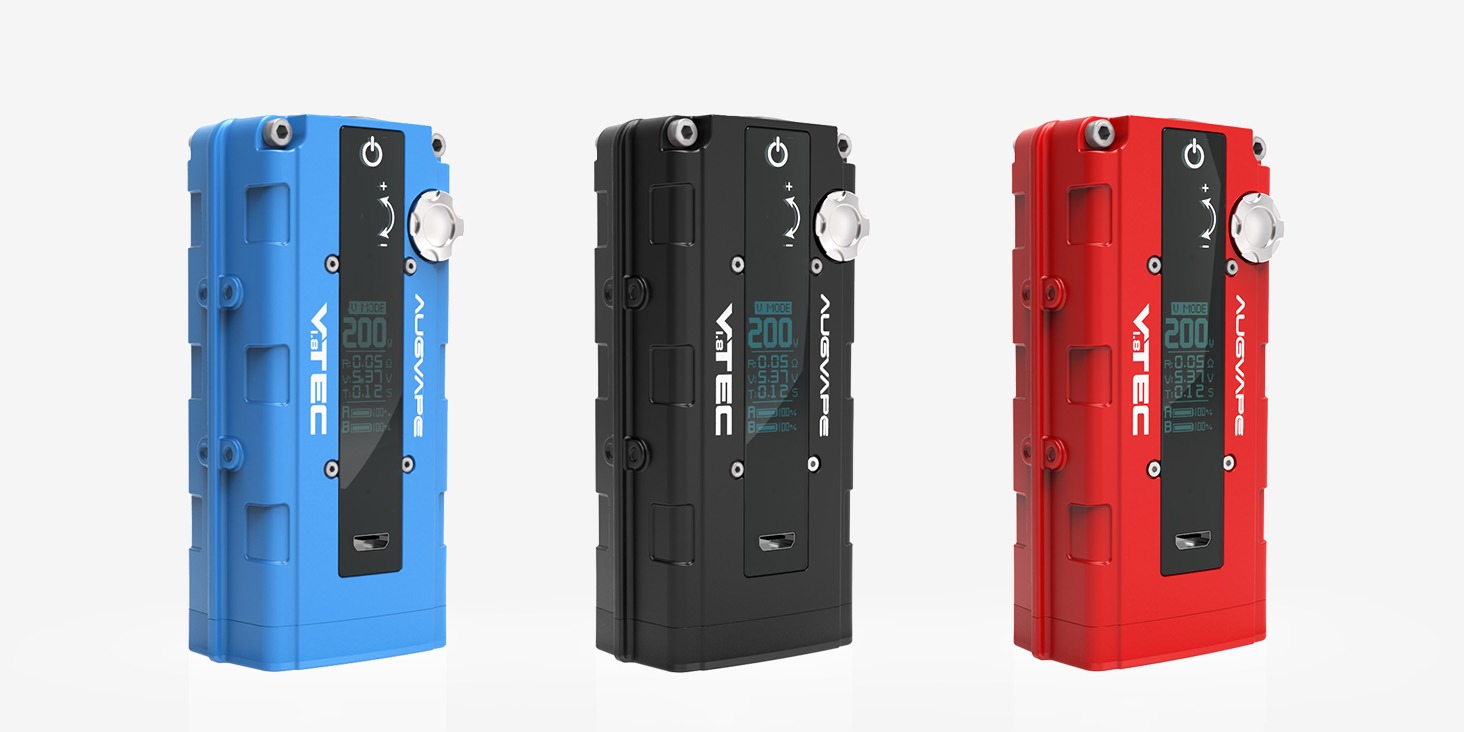 The box mod comes with a USB cable and instructions.

Available in 4 work modes for your options

Three colors available for your selections And hello again, dear vapers and connoisseurs of tasty e-steam. We continue with you to seek out all the most interesting among the vaping devices from manufacturers from around the world. Company Thunderhead Creations we have with you thoroughly examined (designers in the US, manufacturing in China) and are familiar with their devices, which were very good. Today I want to acquaint you with the latest developments of developers with a mechanical mod, which can work from more productive batteries, but if you are not yet sure about the new formats ( 20,700 and 21,700 ), then it doesn’t matter, you can also use the mod with vape batteries format factor 18 650. The mod stands out for its high-quality design and interesting build, besides, the manufacturer asks not so much for such a mod, we are used to seeing high-quality mechanics for as low as $ 100. But here things are simpler. Okay, let’s get this in order. So, comes the mod in a black tube with the logo and the inscription of the manufacturer. Inside the tube you will find the mod itself and the keychain in the shape of a key fob all with the same company logo. There is nothing else inside the box. And wait, forget, in the case you will find an adapter, with which the mod can be used with batteries of 18,650. The mod looks great in any version, of which there are several. The main body material is represented by two materials: copper and brass. The inscription of the name of the mod and the logo flaunt on one side, on the opposite side there is a special notch in the case, this solution of the developers allows the vapers to more reliably fix the mod in the palm so that it does not slip out. The button also has a logo engraving. An inscription reminding us of the manufacturer’s company is also engraved near the connector. Each mode is given a unique serial number, which you will also find engraved on the case. Dimensions: as you have probably understood from the title, the diameter of the mod is 26mm, it narrows to the top of the mod, so the seat is approximately 25mm, atomizers with a 24m diameter will look great in tandem with this mod. The mod is assembled solidly, the button constructive deserves special attention. If you look closely, you can see that the button is made not flush with the case itself, it is as recessed in the case itself. The button itself has a spring mechanism and as they say with an innovative solution of the use of the ball in the design, but we all know that it is not Thunderhead CreationsWere the first who applied this solution design. The button can be disassembled in a matter of seconds, as there are many small components in it, you will often have to clean it. So now the most important thing, as mentioned in the first paragraph. I talked above about the cost, so this mod that you see in the pictures costs $ 40, as for me, this is quite reasonable price. So those who are interested can already safely order and personally test the mod in practice. All thick and tasty, and may steam arrive with you. Today we will get acquainted with the new version of the Reuleaux Tinker box mod from the well-known company Wismec .

At the end of last year, the popular Chinese manufacturer Wismec  introduced the Reuleaux Tinker box mod , the case of which was styled as basketball sneakers with rubberized inserts. In addition to the remarkable appearance and good ergonomics, the device had a rather solid performance, but it did not gain much popularity among vapers. The other day, the guys from Wismec  decided to give a second chance to the above name and assigned it to their new development, while not forgetting about some useful home chips. We are glad to introduce you to Reuleaux Tinker 2 . 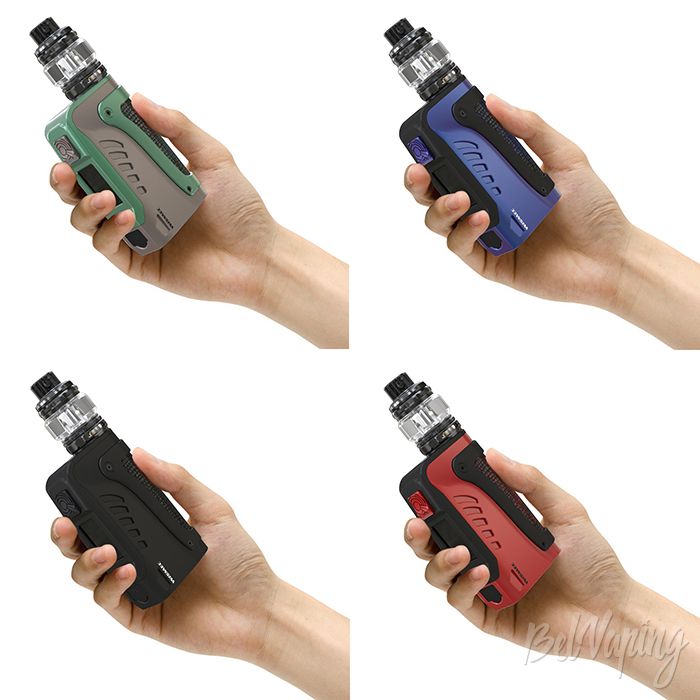 Some distinctive features of the predecessor are easily guessed in the design of the box mod, but the overall concept has undergone significant changes. So, Reuleaux Tinker 2  has protection against moisture, dust and shock according to the IP67 standard, which should save the user from having to worry about the device. From the available colors you can choose one of four options: Titanium gray, Blue & Purple, Black or Red. 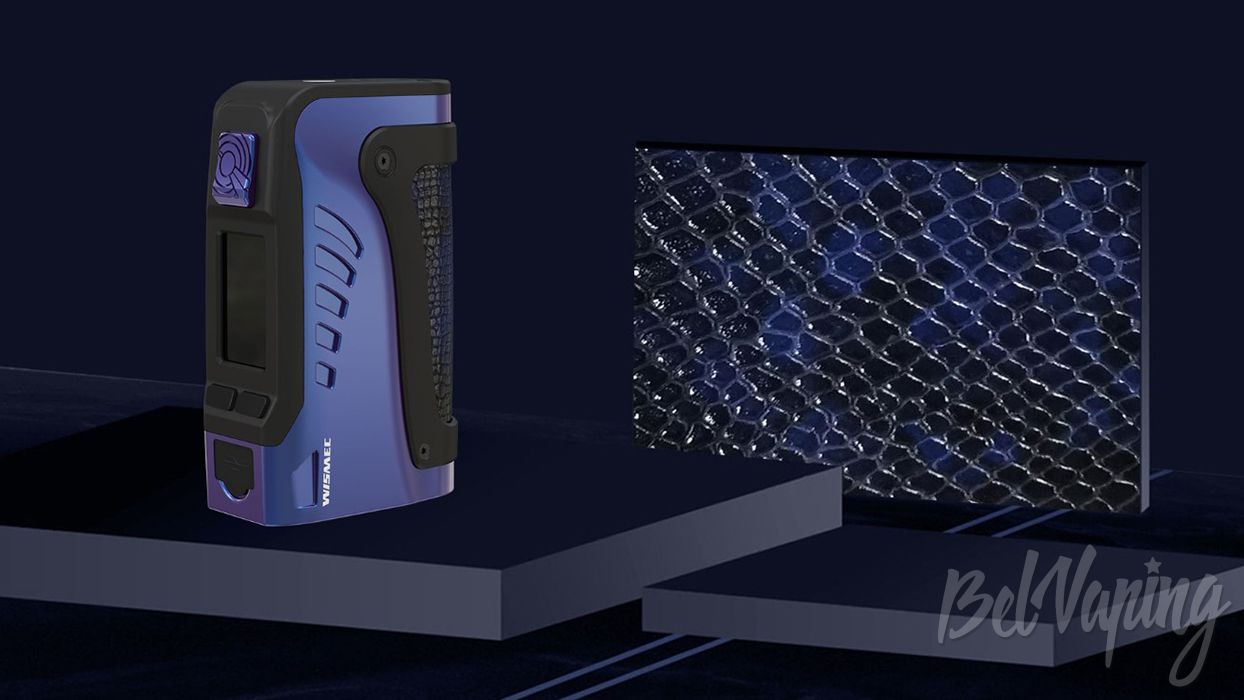 In addition to the metal case with soft touch coating, the back surface of the box-mod has received a textured crocodile skin insert, and such a decision should have the best effect on the comfort of holding it. 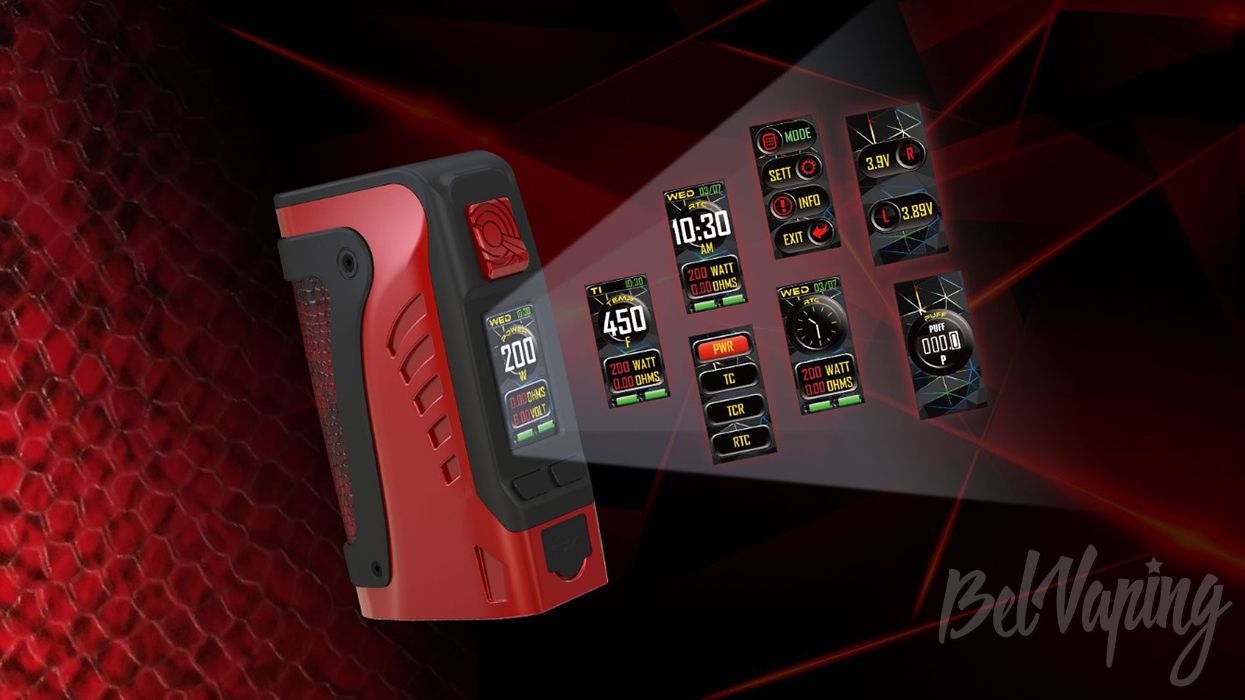 Inside the Reuleaux Tinker 2,  a familiar and familiar board with the same studied functionality is traditionally installed, and the maximum output power of the device is 200W. Interact with the device is offered using a color display with a diagonal of 0.96 inches. On-site and all sorts of variations in temperature control, and the minimum supported resistance in all modes – 0.05Ω .

The novelty works from two replaceable batteries of format 18650, installed through the bottom spring-loaded cover on a special latch. Reuleaux Tinker 2  also allows you to quickly charge batteries with current up to 2A. 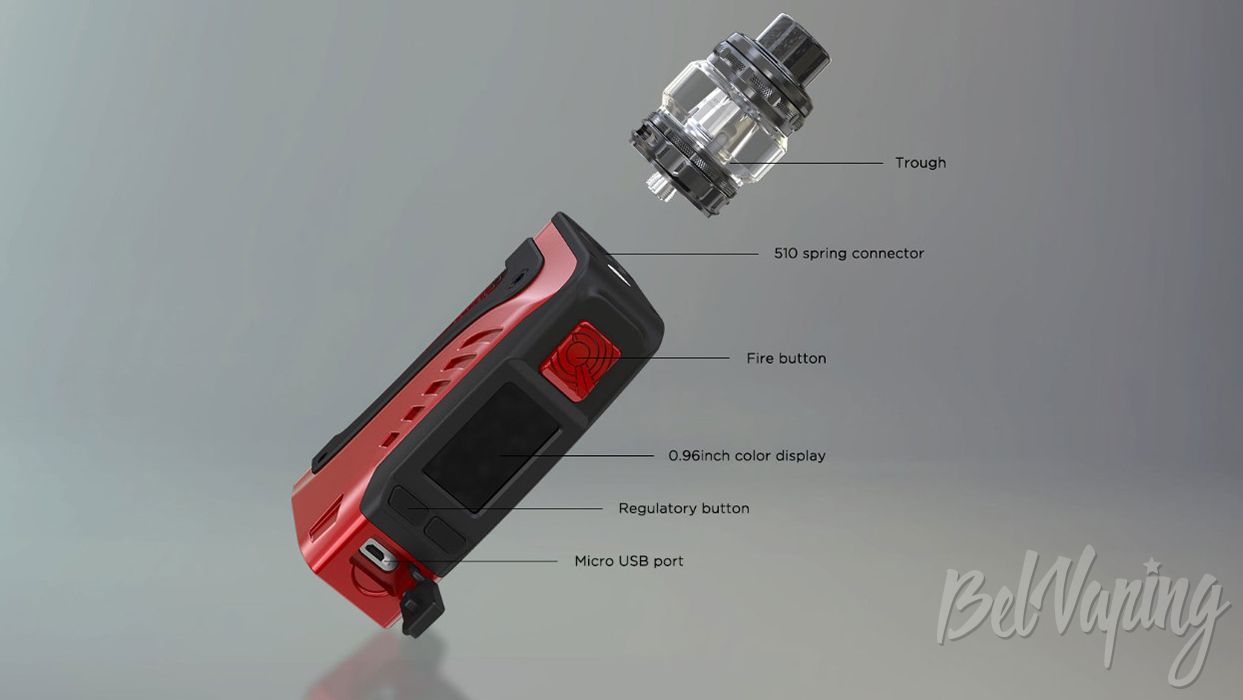 The boxmode will be sold both separately and bundled with an unattended tank called Trough , but in all four colors the atomizer will always be painted black.

After the salt nicotine and liquids based on it appeared on the vap market, manufacturers massively began to produce closed-type systems designed for soaring just such liquids. Vaporesso has already more than once pleased the vapers with their POD systems, which are distinguished by their practicality, specific design and technical characteristics. But this was not enough for the specialists of the company, so they decided to release an original device that many would definitely like – Aurora Play by Vaporesso. It’s no secret that most vapers are former smokers, many of whom have successfully used the legendary Zippo lighters. It is for fans of such lighters and designed Aurora Play POD-system – it is made in a recognizable design, with a specific cover, but also with the ability to soar.

Aurora Play by Vaporesso is a compact POD system styled as a Zippo lighter with a hinged lid, equipped with a built-in battery and working on interchangeable cartridges with different resistances. Styling as a famous cigarette lighter is not accidental, as the vaper is not only a closed type system, but also a spectacular accessory. In order to easily float liquids based on salt nicotine, using cartridges with different resistance. Stable operation of the device is provided by a slightly reworked Omni Board Mini branded board, equipped with a complete set of protection necessary for safe operation. Buy Aurora Play by Vaporesso can be in four versions – metallic gray, steel, bronze and rainbow.

Strange as it may sound, Vaporesso managed to surprise Vapers in Aurora Play with not only the appearance of the device, but also a fairly rich (as for the POD system) bundle. Therefore, vaper expects:

Naturally, the “trick” of the Vaporesso Aurora Play Lighter Pod Kit is its design, made in the recognizable style of world famous lighters. Using a hinged lid is a rather double solution, since on the one hand it’s stylish and unusual, and on the other, it’s not always practical. But in any case, you can be sure that the owner of such a device will immediately stand out among users of standard POD systems.

The essential difference between Aurora Play and Zippo’s classic lighters is the size and the fact that the sharp corners are rounded. Thanks to this, the ergonomics of the system is top notch. A nice addition can be considered that the device is made of zinc alloy, giving it a significant weight. It is worth paying tribute to the specialists of the company engaged in the development of the design – they even managed to repeat the characteristic sound of a hinged lid, which can be opened with a simple movement with one hand.

Vaporesso Aurora Play is powered by a built-in 650 mAh battery, with which you can get two power options – 10 and 18-20 Watts, depending on the type of evaporator selected. The battery is charged with 1A current using a micro-USB connector located on the side of the device. The manufacturer claims that a full battery charge is made in 45-50 minutes.

Board, cartridge and usage features

Vaporesso has supplied Aurora Play with its proprietary Omni Board Mini chip, which is adapted for devices of this format. But at the same time, the chipset shows itself in work only from the positive side, which is good news – it works stably, without failures, applying the necessary voltage to the spiral.

Cartridges for the Omni Board Mini are quite interesting – they are immediately equipped with a convenient and practical mouthpiece. In order for the vaper to choose the best option for soaring, the manufacturer offers two versions of cartridges with resistance of 0.65 or 1.3 Ohms, working at a power of 10 and 20 watts, respectively. The volume of the tank is 2 ml, which is quite enough for comfortable use, especially with liquids based on salt nicotine.

An important feature of the cartridges for the Vaporesso Aurora Play Lighter Pod Kit is the use of the innovative Press-To-Fill filling system – you can refill the reservoir only by pressing the spout of the bottle on the special valve. This solution minimizes accidental liquid drops and overflows.

As with most POD systems in Vaporesso Aurora Play, activation is performed by puff sensor. In this case, the device is equipped with a power button located on the side face next to the micro-USB connector.

It is difficult to say how convenient Vaporesso Aurora Play will be in use , since there are several controversial points about its design, but it immediately becomes clear that the device is branding. At the same time, it is equipped with quite interesting cartridges that allow it to be used with liquids on both salt and nicotine.